by Lilbluesmurf
I guess two lanes is more accurate, but it's one lane per direction so....

It's not attached yet, there are some bugs that will hopefully be fixable.

I am not sure where to start, so I'll just start. The road is 3 big instead of 4. I tried 2, but there wasn't room for cars and pedestrians without overlapping.

The road is fully functional, but is a catch it seems. In order to do a one lane road I had to do one of two things. Either make both lanes occupy the same space, which can result in the occasional car overlap, or invalidate a lane, which makes cars not turn right or left depending on the lane invalidated. Since I am not sure about pathing and how vehicles relate, I have it set for overlap right now to make sure there is no retarded path finding.

The last thing is that the textures don't seem to always line up. I kind of offset the corner piece a bit so none are too awful, but that is hopefully a temporary thing I won't have to keep in. That goes for turn sections too, but I haven't offset them. As you can see in the pics, some line up like they should, others don't.

These pictures are of the current state of the roads, you can see the original in the upper right to compare. If someone is working on the same thing, let me know and I'll upload what I have so far, but I would prefer to wait a couple and see if I can fix some things since my net connection is slow.

So, if anyone can help or give insight into the following, please let me know.
- Vehicle collision. I looked at it a bit, and they seem to have 'bubbles' but it only seems to work for cars in the same lane?
- Texture sizing/scaling. I tried the textures at the original 512, and at 384 (3/4). The corners seem to not offset quite so much at 512, but it doesn't make a difference on the turns. I can't tell a difference in quality so I would like smaller file sizes if possible.
- Texture modifiers. I mean the bump/spec/lum files. All the roads I use have the same 'noise' for bump maps and looking through the files it seems everything needs it's own, but it would be awesome to reuse them. Next, what happens if the files aren't included and how much of a visual difference does it make. And finally, is there a filter or some quick steps people have figured out to duplicate the spec, er bump (the bluish one) colors, preferably from a greyscale image, or does a greyscale image work just as well?
- Road attributes. I would like to have the street lamps alternate sides, but I have had no luck so far. I have tried adding a custom type and category to the different sides then using rules to exclude them with no luck. Is it even possible to have custom type & category or you limited to the preexisting ones? Also tried a " rule="name" " instead of category, as well as the name for the value, no luck. I was aiming for rules that separate them all by seven. Example:

Oh, and please feel free to comment or make suggestions.
by Morpheus121073
I'm actually working on a few roads myself,

for each theme i'm working on a one lane road with modified textures.
i'm also working on an invisible road so cars drive on however you painted the ground.

and i'm trying to make roads where you can choose what kind of traffic drives there, still all work in progress.
by Poetic
Thanks to both of you for making improvements to the game.

These mods look great!
by dedgren
Even a caveman can do it... 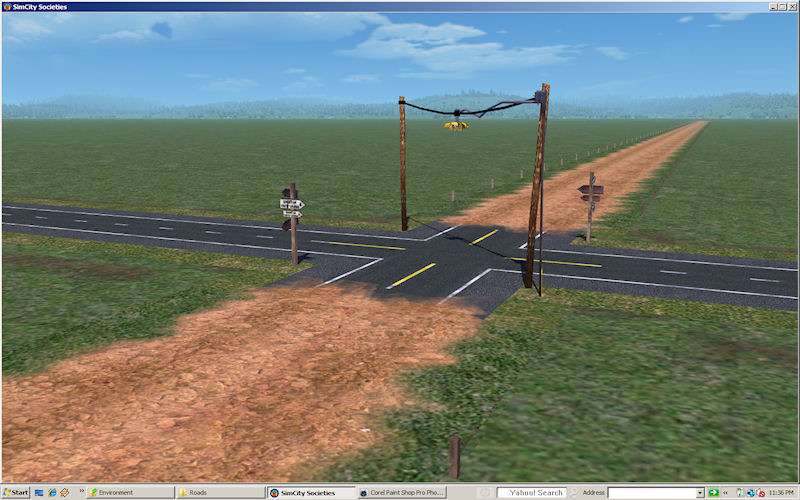 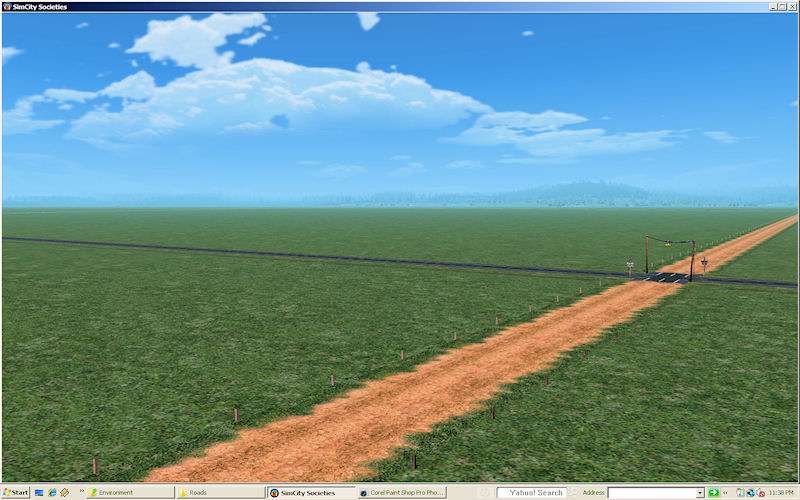 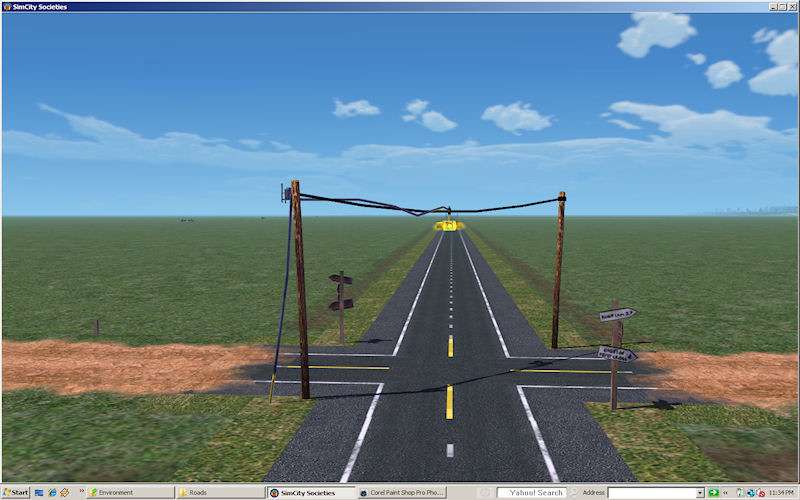 I hate to say it- I still don't like the game a whole lot. But it's proven fun to play around with its extensibility.

I like the creativity I see here and think SCS can be another artistic outlet for me like Second life, so to me the 'fun' in the game is modability

At least no one can say they cannot plan a city properly because the map is bumpy.

by King Faticus
they are the great Plains Kiya.. o_0
they stretch from Canada barely into Mexico and are.. umm.. flat..o_0

in some parts of the plains you can see rolling hills, what 'looks like' in the distance, but turn out to be small mountains miles away >_>
by veryConfused
That is a false statement^^
There are hills in the Great Plains, just not many very steep ones like you would find near mountains
by King Faticus
I'm basing my comments off old commentaries from pilgrims traveling the organ trail that showed on the History channel
by veryConfused
From about 100 years ago. Back on topic, how long will it be until this mod is out
by Lilbluesmurf
I've pretty much stopped messing it with it for the moment, there were a lot of issues. I will get back to it after the patch.
by Sim-Maire
This little road is very nice !
by David Beebe
you could toggle the sidewalk off for the 2 tile road if you wanted to experiment with that...
by Khanon
Actually, that would be a great idea, and would also serve a dual purpose of defining your own "road edge", whether that be a fence, cobblestone walk, concrete slab walk, grass, dirt, or even having the venue/workplace run right up to it. It would also sort of set up a sort of "back alley" drive-through, too.
by King Faticus

veryConfused wrote:From about 100 years ago. Back on topic, how long will it be until this mod is out

I get the last word! now quick change the topic!

btw it was 10 years
by Lilbluesmurf
I never messed with no sidewalks. I think I just thought that having a building right next to road with no place for sims to walk wouldn't work.... haven't tested that out. Anyone know if roads without sidewalks will block an entrance?

If it blocks, that pretty much defeats the purpose of having a smaller road. If you have the 2 for the street and then have to have 2 more tiles left open with a sidewalk texture on them you are right back to the 4 tile width for streets.

I guess you could just make the sidewalk lane on the road, but I don't know about collisions and having people/cars pass through each other either...
by Khanon
They will walk on unpainted and painted plain spaces, so you could just paint the ground in the space in front of the building. It would be especially "realistic" to have, then, a paint texture that's a wooden deck look/feel. You could paint the space in front of the building with the wood, maybe trim it in brick or stone, and it would look very much like an old town street.

In fact, using this technique, you could have complete custom painted walkways to match a theme, while allowing the roads without sidewalks to serve the wheeled traffic.

Personally, I think it'd be about the best way to go, especially when you can change painted textures to even smaller squares than what already exists.
by Sim-Maire
What about a motorway 3-3 lanes/autoroute 3-3 voies ?
by Lilbluesmurf
Thats what I'm saying though Khanon, that brings it right back up to taking up 4 tiles (2 for road, plus one empty/painted on each side). I think the reason a lot of people want the lower lane roads is because that is too wide for a lot of high density or small town areas.

As far as 3 lanes each way goes, I don't think it's possible right now. Roads come with three lane designations: inner, outer, sidewalk. If I remember right I tried to add an additional one with a new name as well as another "outer" both with no effect. If we had power over lanes it would be no problem (other than the likely art issues which would parallel what I've run into on this one). Might be in this next patch if we're lucky

Lilbluesmurf wrote:Thats what I'm saying though Khanon, that brings it right back up to taking up 4 tiles (2 for road, plus one empty/painted on each side). I think the reason a lot of people want the lower lane roads is because that is too wide for a lot of high density or small town areas.

As far as 3 lanes each way goes, I don't think it's possible right now. Roads come with three lane designations: inner, outer, sidewalk. If I remember right I tried to add an additional one with a new name as well as another "outer" both with no effect. If we had power over lanes it would be no problem (other than the likely art issues which would parallel what I've run into on this one). Might be in this next patch if we're lucky

Actually, as far as I'm concerned, it's a bit different. I'd like the 2-lane roads for looks. Without sidewalks would allow for me to set custom sidewalk looks based on where I'm putting the road. Also, still, you'd have a narrower road if you can remove both outer lanes AND both sidewalks. Hmmm...will cars turn right without the outer lanes?

At any rate, you've still got narrower roads and the ability to have custom sidewalks or no sidewalks. In fact, when I used to live just north of Sacramento, that was a big thing... 2 lane roads, no sidewalks, houses set back from the road with a gravel or stone drive, and grass growing right up to the very edge of the road.

Hell, it could even allow for the placing of trees so as to actually overhang the roadways.

Now we need someone to make a couple dozen different single family residence models and I'd be nearly in heaven (still need them freeways, curving roads, and fences other than the iron for home yards and business alleys!). *grins*
All times are UTC
Page 1 of 2
Powered by phpBB® Forum Software © phpBB Limited
https://www.phpbb.com/