What are you playing now?

What are you playing now?

Here's a chance to tell about your latest gaming love or loves and tell about anything new or old that are playing now.

I still have Children of the Nile loaded up and ready to run, along with Caesar IV. I'm still playing (solo, instead of online) World in Conflict, which I helped beta test back in the day.

WIC has a online portion to play, but I've gotten tired of all the little dictators out there that want to tell you how to play. So I opt for the campaign game path of WIC and play set scenarios against the computer, or, I will setup a "local server" option the menu, but play against evenly matched forces run by the computer.

What is or was WIC? Its premise is that the Soviet Union did not fall in 1989. Instead they went on a war footing and invaded Europe and the U.S. You move small units of infantry over a God's eye style map and fight in all sorts of terrain including cities and deserts. You can zoom down to ground level view, if you want to, as the battle rages around you.

Players pick on type of unit to control, Armor, infantry, artillery and helicopters (gunships and/or transports). You try to capture various areas of the map in domination style play, or push the enemy off the map with the assault mode of play and there is tug-o-war mode where the front line constantly shifts back and forth until you win it all or get overrun within the player's chosen time setting.

As you capture designated areas or destroy enemy units you garner "support" points, that allow you call in various types of off-map support units, such as heavy or light artillery, air strikes that deliver cluster bombs, napalm, or smart bombs for pinpoint strikes. You can also call in light armor units, delivered by helicopter, to add to your forces, or, para dropped special ops units to fight on your side. There's even a tactical nuke than can wipe out large concentrations of enemy forces.

Everything on the map is destructible, including the ground. By the end of chosen (by the player) time period, the map sometimes resembles an old used ashtray. Explosion graphics are well done including the pressure wave effect emanating from fuel-air bombs, or parachute dropped MOAB bombs. The cherry is the tactical nuke explosions with a blinding flash, a eerie nuclear whine as it goes off and leaves a huge crater at ground zero.

In the campaign mode you follow fates of pair of grunts, a bumbling lieutenant and colonel as background story as you fight your way through European locals and ultimately end up defending home soil in the USA against the invaders. The story line is narrated by actor Alec Baldwin.

The game has been around a good 10 years now but I never get tired of it because the variables of the action can be challenging.

I haven't been trying out too many new games these days. But that doesn't mean I won't rule out a real great game that may come along.
Top

CotN still installed togather with C4 and Zeus. I am playng Dawn of man and Surviving Mars.
Top

I took a quick look a t SM just now and it seems kind of interesting although there have been many similar games to in the past. How does the game play strike you, is it monotonous or does it keep you engaged the whole time you play it. Some game seem to get bogged down in repetitive steps that don't seem to get you anywhere over and over.

Example: [b]Starfleet Command[/b], an old PC game based warfare in space between the Federation, Klingons, and other species. The combat between ships is challenging, but it does get repetitive after a time. Playing it using the strategic map to move to the next section of a sizable map is very monotonous and it takes forever to conquer a large portion of the planets and sectors on the map. You move to a sector carry out a mission to a planet and it's yours, or you run into a hostile ship(s) an either fight or run.Not bad for a while but after you passed though forty or more sectors it is monotonous.

There is a new online app version of this same game concept now being advertised on TV called Fleet Command. But reviews have not been good despite the beautiful 3D graphics you see represented on TV. Most say is just a cash cow for the developer, and you have to spend mucho denaro to get ship improvents or new ships to get anywhere in this game. Too, bad looks stunning on the commercial advertisement.

Homeworld an old Sierra game is a different tack in space settlement. It seems to keep you occupied with new things each and every scenario. You start out with mothership and start on trip to your species planet of origin to start civilization over. You have to devote resources to get technical improvements to build new ships, better engines, new weapons, etc. You have to send out small mining ships to mine local asteroids in the sector. These are the taken to the mothership where they are used to garner your tech points to make the new ships, engines, etc. As you move your fleet grows as complete or capture new ships. Along the way you run into enemy forces and fleets that you have to attack or fend off. Eventually you arrive at the ancient homeworld and face enemy fleet and have to complete task mission to successfully complete the game.

I found Homeworld very engaging. There was an expansion to it called Homeworld Catalyst. And recently, another company has revamped the game graphics to make the game even more visually stunning and it too is called Homeworld 2 and game play is the same or better than the original. It's available via Steam now.

I've been getting a hankering to re-install this old classic and set off on another galactic trip to the Homeworld.
Top

A prototype 'mod' of Caesar III with more intelligent walkers, zone-based farming and other tweaks. I could actually use some initial playtesters, if anyone has an hour or two to spare? 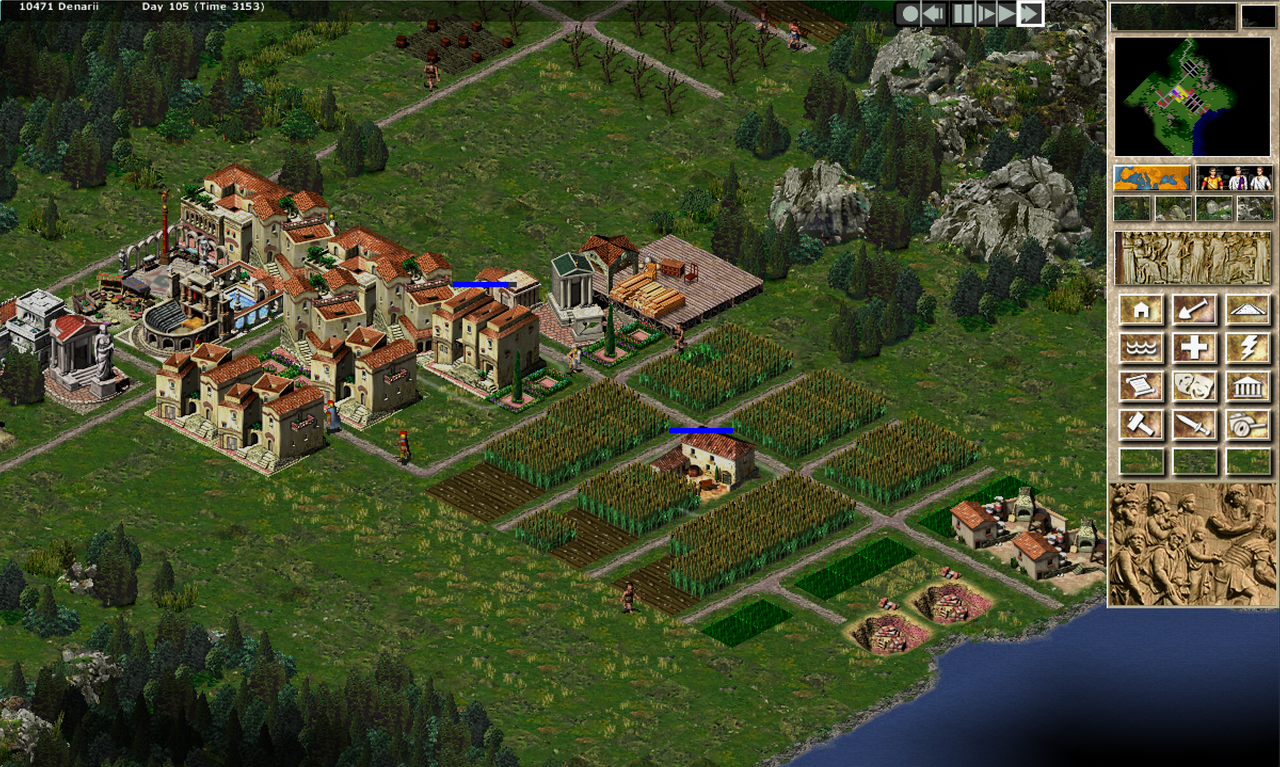 Also been playing some of the rebooted X-Com and Darkest Dungeon, though I'm... ambivalent about the latter. Really got sucked into X-Com, though.
Top

Interesting. Did uou write all new code for your C3 mod or just make modiications? Can you explain in a bit more detail the thoughts behind your changes, such as zone farming?

The need for smarter walkers needs no explanation.

Keith wrote:Interesting. Did uou write all new code for your C3 mod or just make modiications? Can you explain in a bit more detail the thoughts behind your changes, such as zone farming?

The need for smarter walkers needs no explanation.

Cheers. It's pretty-much entirely new code, originally written for some quite different game project/s, though Pecunia from the C3 Heaven forums helped me out with unpacking the .sg2 image files. (The original's source code has been lost completely, apparently, although she's recreated it in great detail for the Julius project.)

Basically I felt like zone-farming gave better verisimilitude and I like the visual effect, though it's somewhat hampered by the lack of appropriate seeding/harvest animations for citizens. (RotMK gives some precedent, after all.) I could add things like seasonal effects or even snowfall in northern climates easily enough, and maybe irrigation if I can match the art style.

The bigger changes are more fundamental, though- all buildings have to be constructed from wood and stone, so there's no immediate construction-cost, and you can effectively plan out districts while paused without having to spend anything until the work begins (so there's no need for the undo button.)

There's also fog of war, so exploring early on is important, traders are actually recruited by warehouses on your side, rather than being sent by the foreign city, and your citizens can 'level up' over time as they gain experience crafting/fighting/farming/etc. (I'm contemplating a system that would let the player hand-pick some citizens to take between missions.) I'll probably make relations with native tribes a little more nuanced as well, with more of a connection between whether you coddle/mistreat them and how likely other tribes in the same faction are to invade.

In principle, I could look into some fairly radical options, like proper multiplayer games with multiple cities on the same local map, maybe engaging in coopetition to achieve certain ratings first. Not sure, though, and that's a while away.
Top

I, uh, should emphasise that most of the above is not 'set in stone'- this is still an early prototype and various features could be adjusted or cut entirely depending in part on player feedback. (Part of the enjoyment in impressions games is getting to size up the features of a given map and plan where to put your industries, housing, defences, et cetera, so having to deal with fog of war might put a crimp in that action, or make the early game more of a slog. Then again, it might make sense in the context of military assignments in hostile territories.)
Top

Any feedback would be appreciated.
Top

Playing Banished, as well as Pharaoh/Caesar3, and even Emperor sometimes. Looking forward to Builders of Ancient Egypt. I've heard good things about Ostriv and Foundations.
Top

It's been ten years since I've logged into this forum! I was watching a YouTube video about city builder games coming in 2020 and it made me wonder whatever happened to Tilted Mill. Many of the user names are familiar still.

To answer the question for this thread, I still play C3. But most of my gameplaying time is spent on Civilization VI. Just moved back to Windows after being on Mac OS for most of those ten years. Makes it a lot easier to play C3 now - no virtual machine required.
Top

I am playing Fallout 4, and have been playing it for four years now. I play it as a builder game, with guns. Intermittently I play a pure builders game, such as Surviving Mars, Project Highrise, Project Hospital, and many others from GOG. I also play Cities Skyline from Steam. But primarily I play Fallout 4 because I can customize that game so much.
Top
Post Reply
12 posts • Page 1 of 1

Return to “The Outside World”